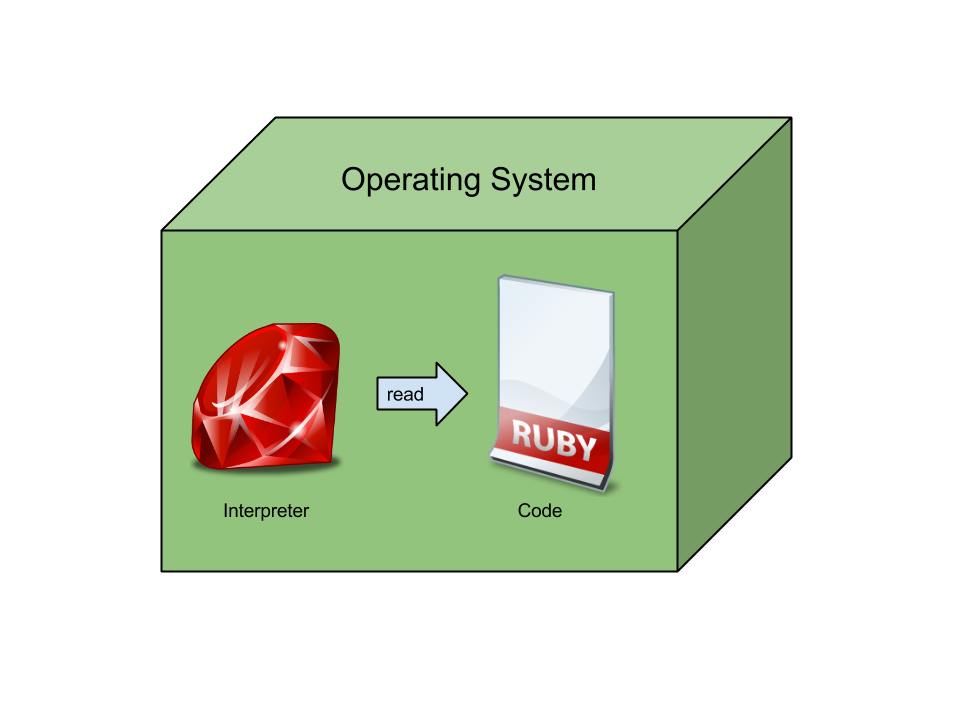 Don’t be scared of coding. It’s actually pretty simple. Any program is just code running by an interpreter inside an operating system. Let me explain:

That’s it! So all we need to do is to write some ruby code and run it. Let’s figure out how to write code.

Note that every programming language has it’s own convention. It’s a set of naming rules that programmers agree to use for the sake of consistency. Here is our first Ruby convention. A variable name in Ruby is always lowercase separated with the underscore symbol. For instance: variable or variable_with_many_words.

Seriously, try it, right now. Go to your terminal and run irb (Interactive Ruby). This tool will run the code you type in the real time. It’s amazing!

Now just type in the ruby code from above line by line. The same way as you would type regular text. As soon as you hit Enter, your code gets executed and you will see the result. If you typed it correctly, you should see this:

Here it is. We wrote our first lines of code. Congrats!

Variable has a value. The type of this value is called a Data Type. In other words, if a variable is a label on a box, a data type is the way to describe what’s inside the box.

You might notice that the condition might be evaluated to either true or false. Here is our first data type called Boolean.

Ruby is a very simple language. There are just 3 basic data types:

Go ahead and try it in your irb

From now on, I highly encourage you to type code in. You’ll learn way better by typing code yourself instead of just copying and pasting.

Let’s imagine a highway. If a highway had no turns, then it could only lead...

We need tools in order to program. This is where programming starts. Unfortunately, for many...