Product development is a very complex task involving ideation, product and project management, design, software engineering and testing. As you develop more features, manually testing every feature becomes impossible over time. The number of bugs increases and the development cycle slows down. This post demonstrates how to automate your quality assurance efforts to increase the quality of your product and iterate faster.

Let’s take a look at a typical software development cycle with only manual QA. 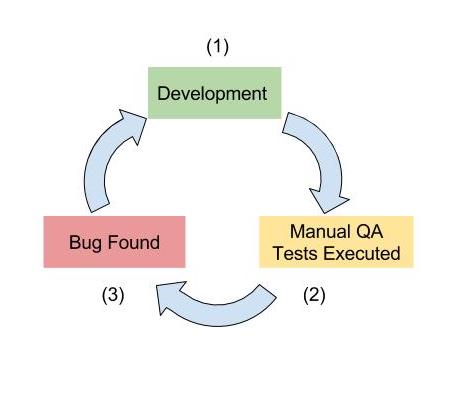 Let’s say you have two teams, a software development team, and a QA team. Software engineers only write application code, the QA team tests the developed product. Once a new release is developed under phase 1, the software goes to the QA team. The QA team executes manual tests by going through the user interface and making sure the product works right in phase 2. If a bug is found in phase 3, the QA team tells the development team how to reproduce the bug. Sometimes a product manager is involved to prioritize bug fixes to go in certain releases. As you can see, it’s a complex process involving communication between developers and QA engineers on a regular basis. In addition to it, there are only so many manual tests that a human can execute per day.

Manual QA doesn’t scale well. As I mentioned previously, what happens after you develop more and more features, a number of manual tests increases and teams usually make one of the following decisions. They either hire more QA staff (which may be challenging for startups with limited capital) or execute fewer tests. Unfortunately, most of the companies I’ve seen go with the second approach which causes bugs, loss of customers, and lost revenue.

There is another way, have computers execute tests for you.

What are automated tests

When you write a piece of software, you want to make sure it works correctly. Let’s say, you implemented a login screen in your mobile app. After you’re done with your task, you may go ahead, stand up the app and try logging into the system. After you move on to the next feature, you test the next feature is a similar way. As you develop more features, you can’t possibly test all features you developed to date. It will simply take you too much time to test every feature manually every time you change the code. What ends up happening is that you break previously developed functionality without even realizing it.

That’s where automated tests come in. An automated test is a piece of code that executes your manual test. You write it once and execute it with one command any number of times you want. In the example of the login screen, you write a test that stands up the app and taps into a field with an invisible finger, enters some information and checks that the user is successfully logged in. 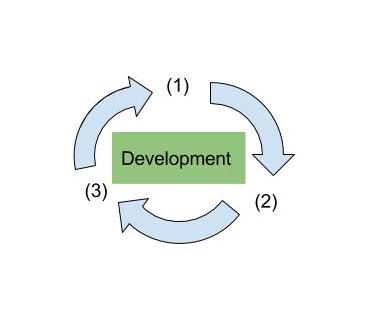 As you can see from the following diagram, all 3 steps of software development happen during the same development phase. It involves fewer people, it lowers communication overhead and increases quality (computers are more consistent at running tests than humans).

How to automate your tests

Automated tests are a great way to increase quality and iterate faster. If you keep your tests healthy, you can ship your software to production at any time. It allows your business to move quicker, iterate and learn faster. Writing automated tests is an important skill for every software engineer. It takes some time to develop and it pays off big time. Every system is different. That’s why you need to constantly challenge yourself with writing fewer tests that cover more functionality.

Developer Ethics. 5 Ways To Apply Your Unique Skill To Make A Difference

As software engineers, we develop products affecting lives of millions of people every single day....

Serverless Microservices with AWS Lambda. How to Build a Robust and Cost Effective Back End product.

You probably heard a lot of hype about the serverless technology like AWS Lambda and...